Dr Maurice Hilleman is considered by many to be the father of modern vaccines. Over the course of his career, he developed many of the vaccines that are routinely recommended for children today. By the end of his career, Dr. Hilleman had prevented pandemic flu, combined the measles-mumps-rubella vaccines (MMR), developed the first vaccine against a type of human cancer, and much more. It is likely that Dr Hilleman’s work has saved more lives worldwide than any other scientist in history. The 2020 Maurice R. Hilleman Essay Contest is coming soon!

Check back for contest details and entry form in early April 2020.

2019 Writing prompt:
How would the world be different if Dr Hilleman had not lived the life he did?

Teachers listed on winning entries each received a signed copy of Vaccinated: One Man's Quest to Defeat the World's Deadliest Diseases 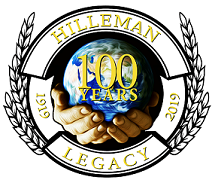 Imagine you’re walking down the street, and there’s a small child in the middle of the road. Oblivious to the truck barreling towards them, they are walking too slowly to make it to the other side in time. The driver would stop the truck immediately if he was able to see them, but they’re too short. What would you do?

In an effort to save their life, you jump into the road and pull them to safety. Inevitably, you would be named a hero by everyone watching. You saved the life of somebody who had barely begun theirs. If you are a hero for saving one life, then why has the man credited with saving millions of lives received no recognition?

Dr Maurice Hilleman developed the majority of vaccines that are still being used today and has saved the lives of approximately eight million young children each year. That’s an almost unreachable number when attributed to humans. Can you imagine being the saviour of even one million people, let alone eight million each year? However, the question stands; how would the world be different if Dr Hilleman had not lived the life he did?

How many of the people reading this would even be here? How many would have been killed by a disease that could have been prevented, but now they will never have a family or job? And it if wasn’t you who was lost, what about your friends and family? Imagine getting ready to have a baby and start a new life, but instead, have to watch your new child die before your eyes. Who could handle the weight of the fact that your new baby girl might not live to adulthood? That you might not ever get to watch her learn to walk or send her off on her first day of school? There would always be a chance that the bacteria would find her a suitable host to infect, and you would lose her.

Think of the doctors who have to watch child after child succumb to a disease that they cannot treat, who have to watch would-be parents sob for their child who they’d never get to know. What brilliant minds would’ve been lost? Future inventors and CEOs? Someone who might have discovered something that would change the world, but now never has the chance?

If that doesn’t move you, imagine walking through your town graveyard. It’s likely that it mainly hold the graves of the elderly, a sparse few the graves of ones lost too soon. However, without these vaccines, your graveyard would be lined with the graves of children. Rows and rows of headstones that display a timeline of only a few years. Graves of people that weren’t around long enough to discover their passions, form connections to the people around them, and find out what they believed in. Graves that lay above countless tiny bodies.

Do you have children? When you look into their eyes and hold them, what do you feel? Would you want to risk losing that? If you’re like most people, when you look into the eyes of your child, you feel the urge to protect them. How can you protect them from a disease with no cure?  A disease that has stolen millions of young lives? The truth is you can’t.

So if you love your kids, your family members, and your friends, I’m sure you’ll make time to appreciate the man that made sure they’d be here with you, and appreciate the works he helped make with his vaccines.

It is no question that the accomplishments of Maurice R. Hilleman changed the world. However, the average person most likely sees Hilleman’s influence from a distance. Probably, upon learning of Hilleman, they think of some kind of Hollywood-inspired butterfly effect. After all, the vaccines created by Hilleman must have saved so many lives in the years following their creation. How many of those people have gone on to do great things because they never contracted a deadly disease that they were able to be vaccinated against? How many infants were protected from congenital rubella syndrome because their mothers were vaccinated? There are endless amazing possibilities as to the specifics of Hilleman’s impact on the world we live in today, but none matters more to me than my sister.

At the age of three, my sister (who doubles as my best friend and partner in crime, and is my favourite out of four siblings), was diagnosed with a rare form of Nephrotic Syndrome. The condition affects the filtration process of the kidneys, thus causing large amounts of the protein C1q to be lost when it should not be. This ultimately causes the immune system to turn on the kidneys, causing renal disease if left untreated. Before she was first diagnosed, my whole family thought that we were going to lose her- the doctor was calling it end-stage kidney failure. Luckily, my parents pursued second and third opinions, and we were finally given an answer and a plan at the Seattle Children's Hospital.

Ever since my sister was diagnosed, she has been on immunosuppressant medications and has tried various immunosuppressive treatments. They are exactly what they sound like- they suppress the immune system to keep it from causing harm to the kidneys. With the help of these medications, her kidneys are safe, but her immune system can no longer keep up with the everyday exposure to common diseases. She missed school most days, home with a cold, until we decided on homeschooling. Due to her compromised immune system, she cannot be vaccinated. For this same reason, she relies heavily upon the herd immunity afforded to her by the mostly vaccinated community. Without the vaccinations created by Hilleman that are common today, that herd immunity would not be there to protect her. Without them, perhaps my sister, with her body’s inability to protect itself, would not be here today. Thankfully they are, and she is.Eleven years later, with the help of Hilleman and his vaccines, my sister is sitting next to me as I write this, waiting for me to do her hair. She likes horses and green tea everything. Her favourite colour is "anything pastel but I'm going through a bit of a pink phase right now." She dreams of becoming a botanist or an ecologist one day in order to fulfil her life's dream of saving the bees, but sometimes she entertains the idea of becoming a horse trainer or barn manager. She spends her free time drawing, hiking, and begging me to chauffeur her around town. If it were not for Hilleman, the world would certainly look a lot different, no matter the angle you analyze it from. But my angle is personal. I love my sister, and Hilleman's incredible mind may have saved her life many times over.

My grandmother, Celeste Meunier, was born in 1952. As a child, she contracted chickenpox, measles, mumps, rubella, influenza, and pneumonia. When asked, she said that rubella was the only disease that was truly frightening because she saw how it frightened her mother, who knew rubella could cause blindness. Celeste laid in her bedroom for two weeks with the lights off, curtains drawn, and eyes covered, with only the visits by her parents and the highs and lows of her fever breaking the monotony. The other diseases were not as scary. They were simply a part of life, accepted because of a lack of other options. It was normal for her to be stopped from visiting a friend’s house because they had fallen ill from influenza or measles or mumps. It was normal for her to be the friend the other children were forbidden from visiting. It was normal for parents to throw chickenpox parties in the summer at the pool or the park to infect all the neighbourhood children at once.

By the time she was eighteen, she was married to my grandfather, Fred Meunier, and expecting her first child. When it came time for her to give birth, the MMR vaccine was available, and she did not hesitate to vaccinate her child, my mother. As I interviewed her, this was one moment that greatly surprised me because, in 1970, the vaccine was only two years old, untested by time. When questioned for her reasoning she said, “You do anything for your children. I had no reason to doubt the vaccine, so how could I pass up the chance to spare them from pain.” It is her belief that parents of her generation did not have the luxury of choosing to not vaccinate their children. A vaccine against a disease a parent knows intimately is a prayer heard and answered.

That year, Celeste Meunier was enrolled in Loyola University. During her time there, multiple close friends of hers died of meningitis. All college kids were at a high risk. It was a sad and difficult part of her life, but it was normal.

Even more difficult was the loss of her father, Raymond Bassich, in 1986, from the now preventable hepatitis B. Approximately six months prior, the dentist had been doing dental work on an infected patient without wearing gloves. Blood from the patient entered his bloodstream through a cut. His kidneys failed. While his was not the most normal occurrence, a death from hepatitis B was not uncommon.

My normal is very different from that of my grandmother’s. It is going years without coming down with a serious illness, occasionally suffering from a bad bout of the flu or strep throat, and annually having at least one case of the common cold. I am not afraid of going blind or deaf due to disease. I did not experience the fervour associated with chickenpox.

To answer the question of how the world would be different if Maurice R. Hilleman had not lived the life he did, the normality of today could have been similar to the normality of my grandmother’s childhood and the diseases mentioned in this paper would have had significantly higher death counts.

My grandmother did not know of Dr Hilleman. When I informed her that he is responsible for the vaccine for every disease mentioned during our conversation, she gasped and said, “It’s a shame that most people don’t know his name, we owe him a lot.” I agree. Thank you, Dr Hilleman. I would not want to live in the world where you did not live the life you did.